What’s the hApps? – Race for the Galaxy on iOS 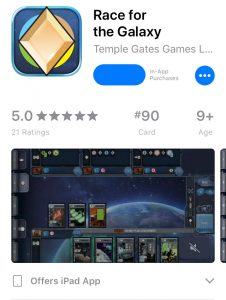 Ok, so in the intro to this series, I waxed poetic about being objective, but today I’m going to talk about my favorite game of all time: Race for the Galaxy by Thomas Lehmann. For frame of reference, as I talk about this app, I have (based on logged plays) played games in the iOS app 249 times at the time of this writing. (HOLY BALLS! -Ed.)

For the uninitiated, Race for the Galaxy is a strategic engine building game — possibly one of the best — about creating a space civilization. You build a tableau of cards in front of you, and in elegant fashion, you play a card in front of you by sacrificing other cards. In fact, other than a few cardboard chits, this game (in physical form) is all cards. 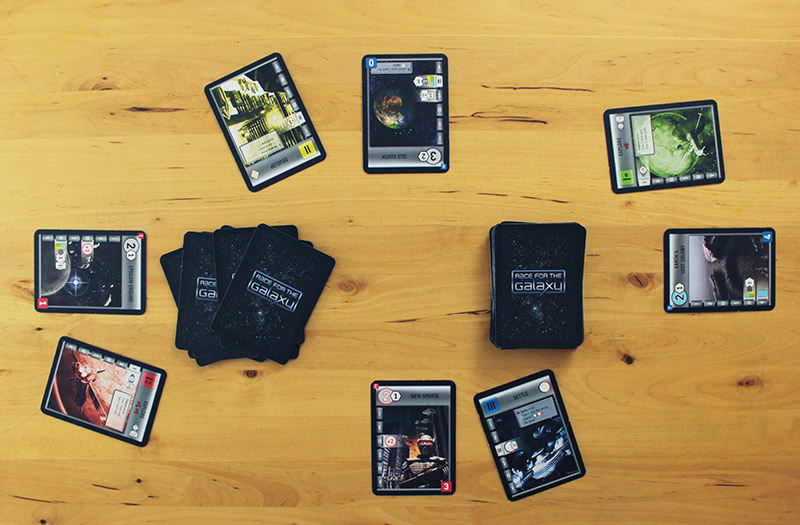 Apart from a few cardboard tokens, the physical version of Race for the Galaxy is all cards

The core mechanic of this game is simultaneous action selection (also called role-taking) in which you choose from a set of different actions each round, and reveal them simultaneously.  Choosing an action gives you a bonus perk for performing that action. All of your opponents also choose their own actions. You always have the option of taking every action your opponents select, but if an action is not selected, it does not happen in the round. 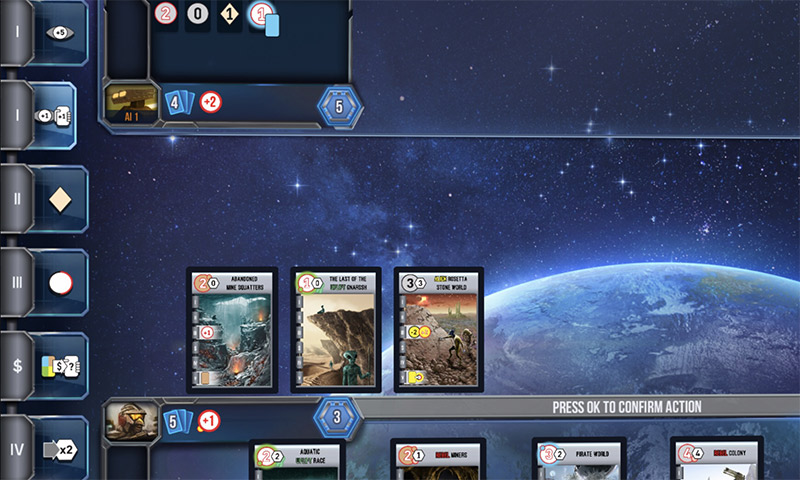 This provides an interesting tactical dichotomy of both trying to predict what your opponents may select, and trying to prioritize doing the action you need or want most.  While much of this game feels like a solitary experience, the action selection is a sneaky bit of player interaction. There are several strategies you can take to win, but the game plays out until someone builds their 12th card to their tableau or the victory point chits are gone. For Ryan’s review of this game, you can watch his Find the Fun video here.

While I love this game, it has quite a few barriers that make it hard to teach and learn, which has probably affected its popularity (it sits somewhere around 51st on the BGG Top 100-ranked games at the time of writing).  Let’s put my enjoyment of the game aside, and talk about the app. In this review, I talk about the things I like (DMExalts), and the things I don’t like (DMExcoriates) about the Race for the Galaxy app.  In particular, I am mostly talking about the iOS implementation, but I’ve heard that the Android and Steam versions operate in much the same way. 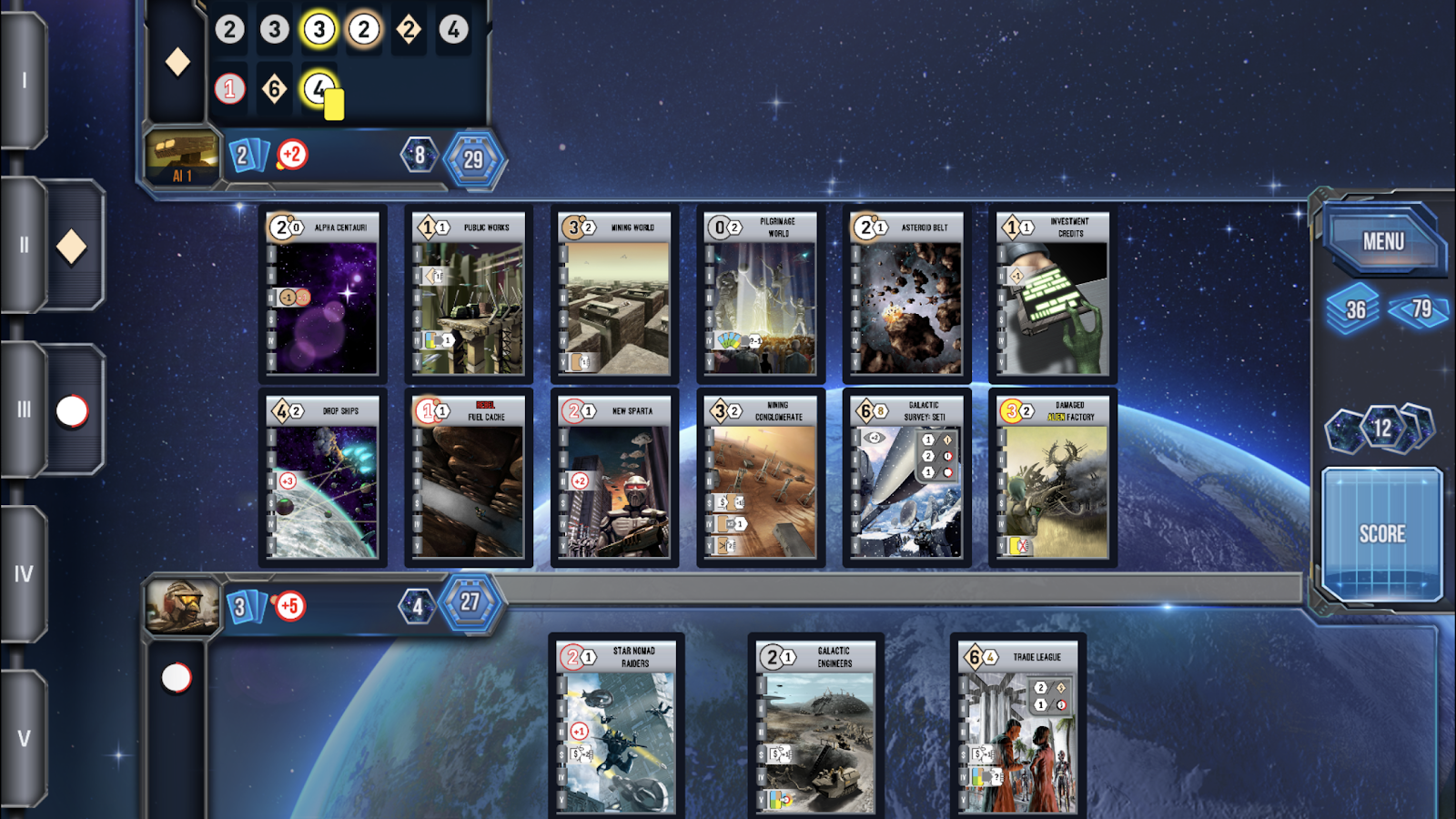 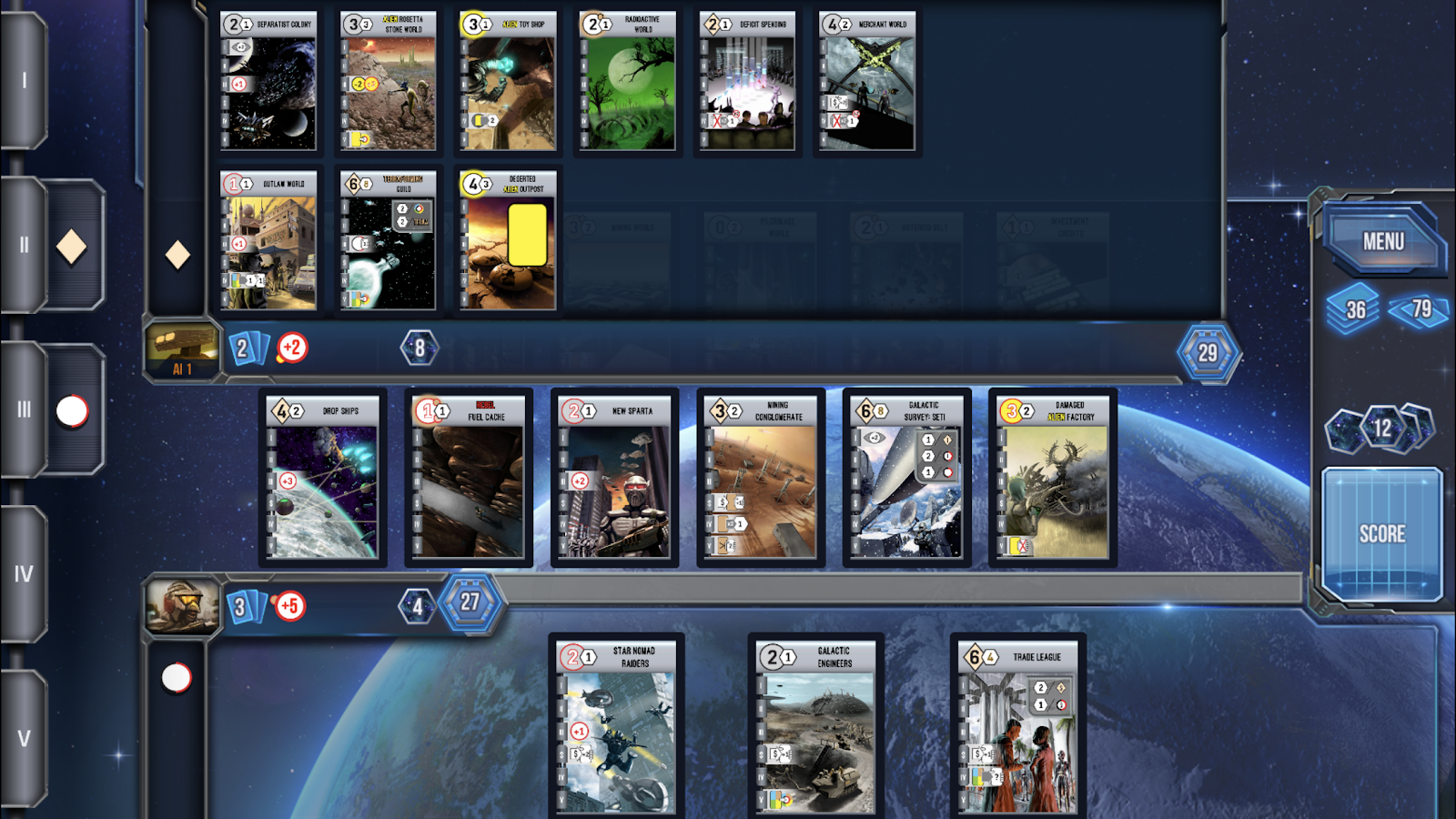 Closeup of an opponent’s tableau

The Race for the Galaxy app on iOS is really well implemented, and I can easily recommend it (and the forthcoming Roll for the Galaxy app by the same developer). In many cases, I actually prefer the digital implementation to the physical. While it has some flaws (namely, it is true to the original art), I think that this app is great for anyone who believes they will like the game, or anyone who already likes the game. If the game isn’t for you, don’t buy the app. It’s really as simple as that. If you like the game, I would also recommend the Gathering Storm expansion, and enabling the New Worlds mini expansion for all plays.

Have you tried the Race for the Galaxy app? What are your thoughts?  Let me know in the comments! 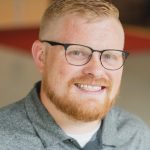 Ben (or Dr. McPheron of DMExplains) is an associate professor of Electrical Engineering and a hobby Youtuber, making videos primarily for the purpose of engineering education, although he occasionally dabbles in music parodies. He is an avid board gamer, and enjoys playing a variety of games with a preference towards heavy economic games. His favorite games include Race for the Galaxy, Agricola, Brass: Birmingham, Pipeline and Vinhos Deluxe.