Why Return to Monkey Island is a Big Deal

It was announced earlier this week that Return to Monkey Island was in development and slated to be released this year in 2022. Many of us Olds are rather excited about it, to put it mildly. If you can’t understand what all the fuss is about, i’m here to demystify it for you!

The original Secret of Monkey Island was a point n’ click graphic adventure game that debuted in 1990. i was a teenager in junior high school at the time it launched, and i remember seeing a two-page advertisement in a computer game magazine announcing it would soon be available for my Amiga 500 computer. 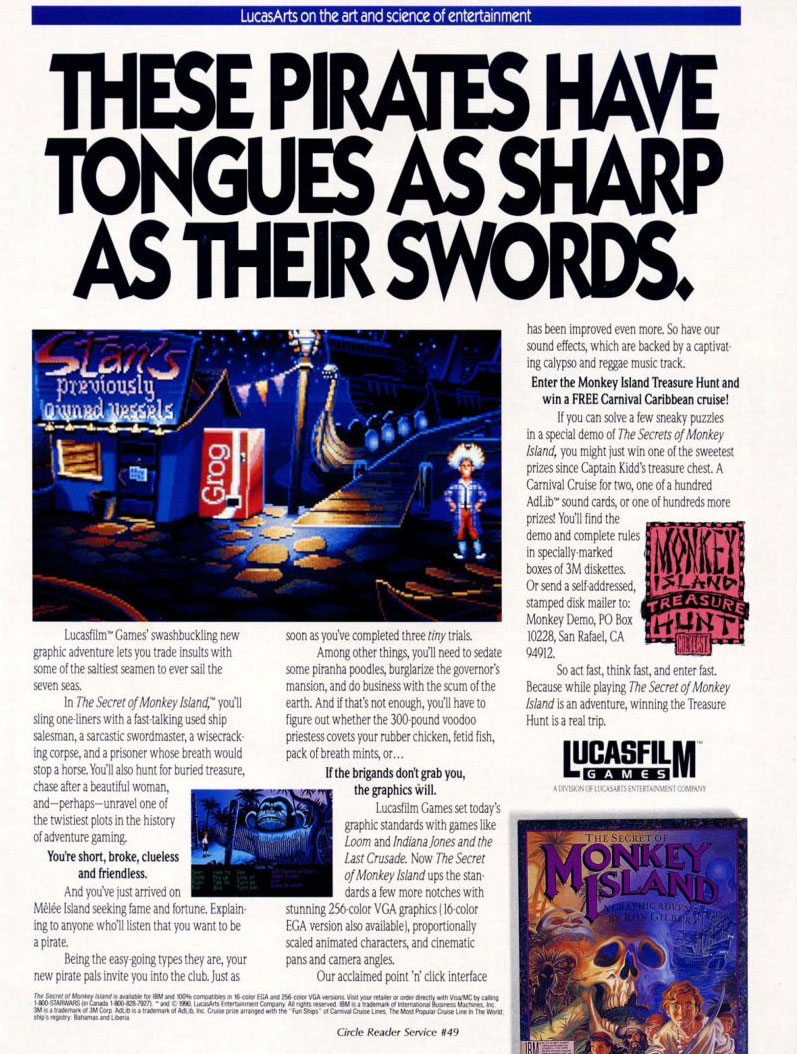 The graphics looked gorgeous (256 colours!) and, having thoroughly enjoyed the Pirates of the Caribbean ride at Disney World, it was a thematic lock: the game would involve pirates, and it would no doubt have the same trademark humour i’d come to cherish from LucasArts (then LucasFilm) games. i didn’t realize it at the time, but the person behind another formative computer game, Maniac Mansion, was at the helm of this one: a man named Ron Gilbert.

LucasFilm was one of Star Wars creator George Lucas’s creative projects, where he endeavoured to bring cinematic flair to computer games which, until then, had mostly been twitch-driven shooters and/or text adventures where, if you were lucky, a static image would accompany the textual description of the scene you were in.

Maniac Mansion blew the doors off that format by having animated characters that actually walked through their letterboxed scenes like they were in a movie, with their dialogue displayed as subtitles beneath the image. i very clearly remember the day when my C64-owning friends The Twins came back from another kid’s house and deliriously described Maniac Mansion to me, and i said “That’s… that’s impossible. Computer games can’t do that.”

They could, and they did, and when i finally got to play a pirated copy of Maniac Mansion on The Twins’ computer some agonizing weeks later, my young mind was absolutely blown. That experience sowed the seeds of my career ambitions that i would follow the rest of my life. 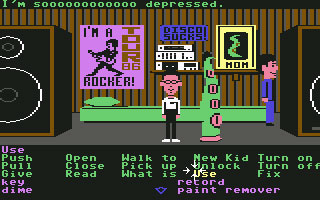 It’s amazing to think what computer games “couldn’t do” in 1987.

The Secret of Monkey Island turned out to be an absolute delight – a love letter to the Pirates of the Caribbean ride (including a few scenes, like the prison tableau, torn directly from the ride) that simultaneously lampooned the entire genre, incorporating pop culture references and Monty Python-esque sensibilities. Monkey Island told the tale of dorky Guybrush Threepwood, a young guy who shows up at Melee Island from out of nowhere declaring his ambition to become a mighty pirate. Along the way, he falls in love with the island’s governess Elaine, and has to rescue her (or so he thinks) from her ex boyfriend, the evil ghost pirate LeChuck.

By the time The Secret of Monkey Island 2: Le Chuck’s Revenge was released the following year, i was a slavering fan who could not WAIT to play it. MI2, also by Gilbert, continued the adventures of Guybrush Threepwood, who had matured considerably since his first adventure (“i have a beard!”). Ghost pirate Le Chuck was now the reanimated zombie pirate LeChuck, and was trying to stop Guybrush and Elaine from locating the treasure of Big Whoop. 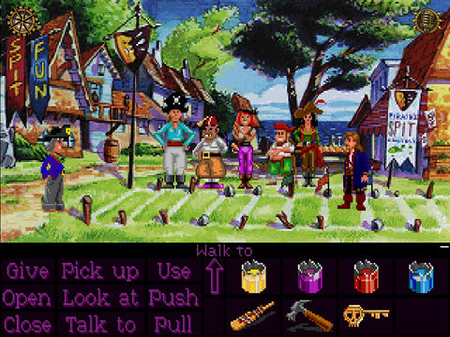 Monkey Island 2 became, and remains to this day, my absolute favourite video game of all time. The game ended on an excruciating cliffhanger of Empire Strikes Back proportions, with an “it was all a dream…. or WAS it?” sort of ending that had us wondering whether to take it all at face value, or surmise that our hero was trapped in some alternate dimension by the voodoo-wielding villain. We waited, breathlessly, for the story to continue. And then it all went horribly wrong.

Five agonizing years later, the next entry in the Monkey Island series, still from LucasFilm (now LucasArts) and still starring Guybrush Threepwood, was Curse of Monkey Island. It had absolutely eye-popping imagery, and i remember being absolutely astounded by the trailer. But something seemed off… Guybrush, who had seemed borderline cool in MI2 with his beard and his awesome blue jacket – kind of like a nerdy but cool young uncle who would sneak you into a restricted movie – had reverted to Full Metal Dork. He was all neck, with a flouncy hairdo that made him look less like Jim Hawkins, and more like a Mad About You-era Helen Hunt. (Admittedly, giving demon pirate LeChuck a flaming beard was an inspired choice.) 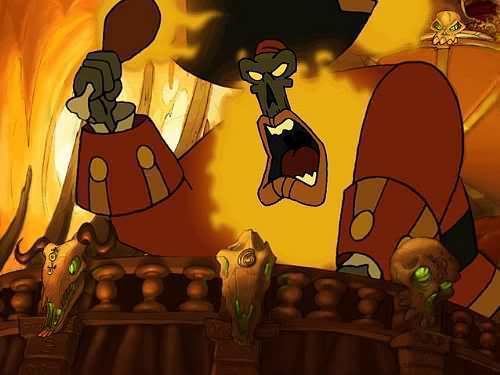 The trailer began with Guybrush adrift at sea in a bumper car surviving on a half-eaten corn dog, a nod to the setting of the mysterious MI2 ending. But it was clearly only a nod, and that Curse of Monkey Island decided to take the story in a different direction. It seemed off. By then, i knew who Ron Gilbert was, and i discovered that he had left LucasArts years prior to make graphic adventure games for the preschool set at Humongous Games. (Characters like Putt-Putt, Freddi Fish and Spyfox may ring a bell?)

So! The Monkey Island series had lost its creator, but LucasArts decided to plow on ahead and milk that franchise, completely ignoring the second game’s ending. This… would not stand.

But stand, it did. i played Curse of Monkey Island. It was fine (said the dog in the midst of a house fire). It had some funny bits. Murray the talking skull was amusing. But it was missing some crucial, core aspects of the experience that made the series so special to me.

Monkey Island mastered a style of humour that i still aspire to. The setting of those first two games is deadly dreary, with Melee Island cast in permanent midnight, and a horrifying villain that doubtless served as the inspiration for some of Disney’s designs for their Pirates of the Caribbean movies. It’s hard not to see LeChuck in Geoffrey Rush’s Barbossa.

Some of the set pieces, like the voodoo lady’s swamp hut or LeChuck’s nightmare-inducing fortress, were awe-inspiring in their creepiness. And then layer on top of that a bunch of comedy routines that would feel right at home in a British sketch show, and the result is a series of laughs that hit harder than they would if the backdrop had been jokey from the get-go. 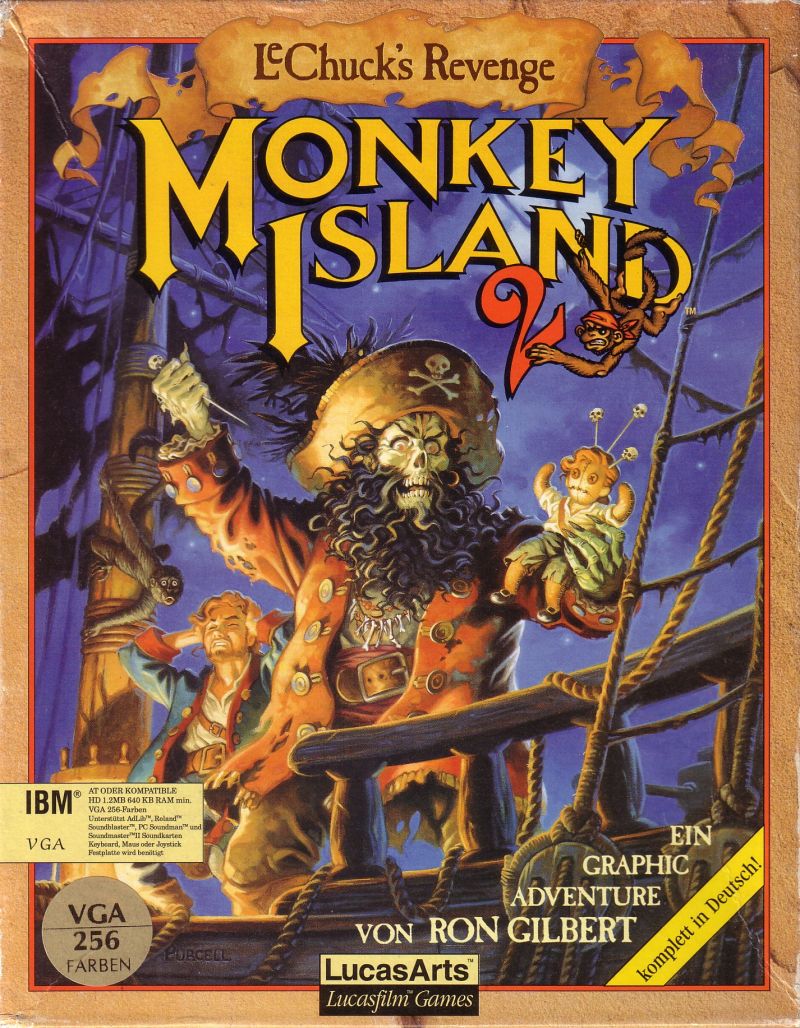 Look at this incredible cover art by Steve Purcell. Are you expecting a comedy?

The Zucker Brothers understand this joke/sombreness dichotomy well. You can experience it in the dire situation faced by the beset passengers and crew in Airplane!, and the Dragnet-inspired sternness that underlies the ridiculous gags in The Naked Gun. The net effect is like laughing in church; you’re not supposed to laugh, because the setting says it’s inappropriate, and so you laugh much, much harder. Contrast this with Wayans parody movie efforts like Scary Movie, which set a goofy tone right out of the gate, and fail to pull off that same deadpan brilliance.

The Graduate, another deadpan comedy, is parodied in The Secret of Monkey Island, hinting at its creators’ taste in humour

There were other Monkey Island games that followed Curse. i half-heartedly played some of them, i think, but by then, the magic was largely vanished. Each one followed the directive “it’s pirates, and there are jokes,” but failed to capture that equisite feeling of trying desperately not to giggle, but failing, from the fourth pew during your great grandmother’s funeral.

i do worry how much of my enjoyment is owed to Steve Purcell’s fantastic artwork. (There’s been no mention of Purcell’ls involvement in the new project)

LucasArts was acquired by Disney in 2012 and a year later, the mouse shuttered the studio.  Many Monkey Island fans kept hope alive that one day, Ron Gilbert would retake the reins of the franchise and pick up where he had left off, and he affirmed that hope to me when he graciously let me buy him some lasagne for lunch one year at the Game Developers Conference. But consider that for a moment – how insane a thought that is: that a creator of a thing which had moved on and had its story continue through many sequels, which was the victim of a corporate buy-out and successive closure, would somehow wend its way back into the hands of its original creator, who – over thirty years later – would reverse time to four sequels ago, (Le)chuck out everything that transpired since, and pick up the story where he left off. That type of thing just doesn’t happen. It’s impossible.

Or is it? Thanks to the internet, where any idiot (including meee!) can have a Twitter account, there’s been a trend towards the democratization of entertainment. i think that rights holders have begun to realize that if they mishandle a property, they’ll lose their fan base, and therefore their profits – and some of these nerdy properties have proven to have a long tail of profits. 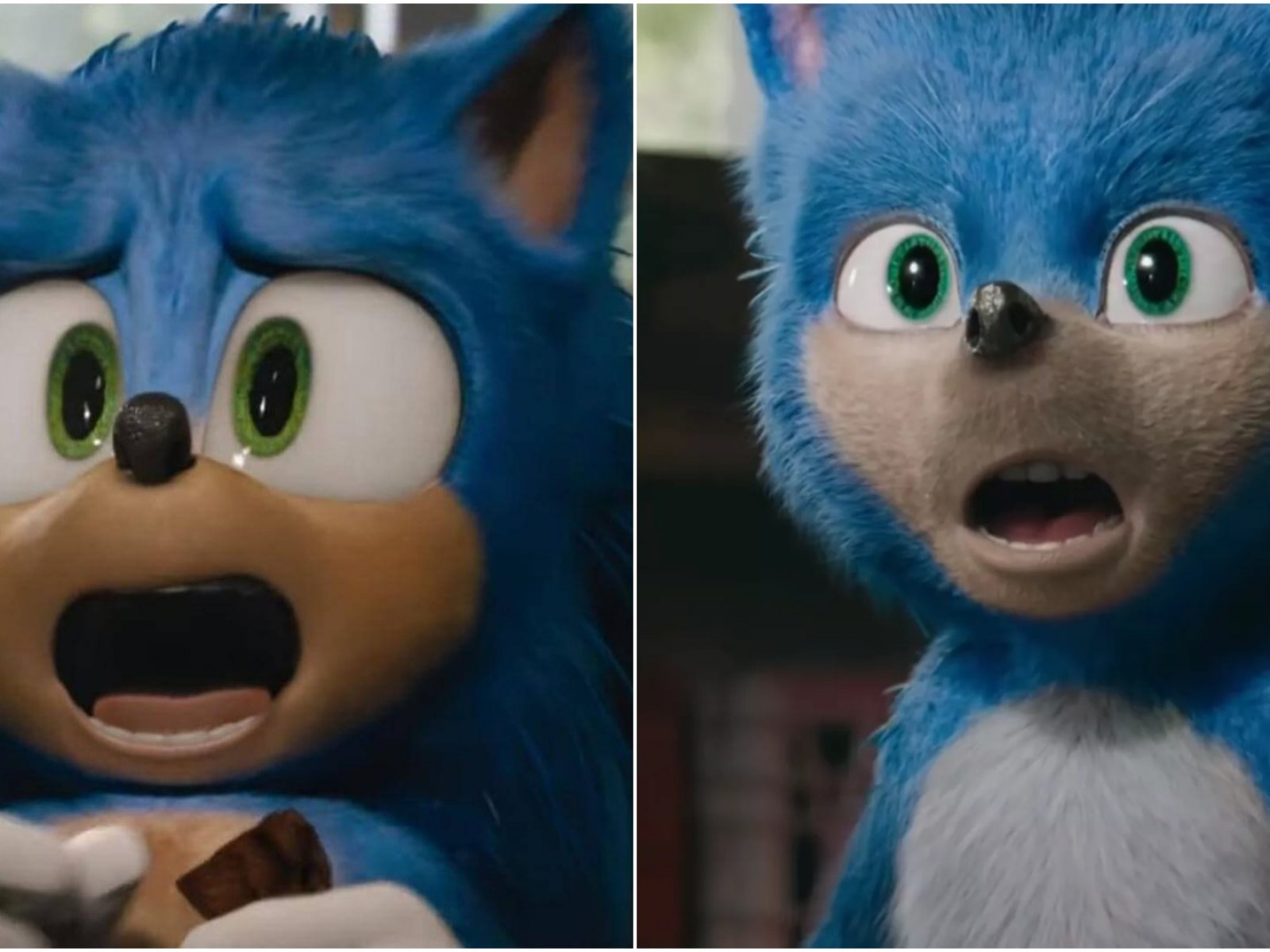 When fans were disappointed (to put it mildly) by the ending of the Mass Effect trilogy of video games, Electronic Arts released an extended cut to appease them. When fans balked at the design of the titular Sonic the Hedgehog in the 2020 film’s trailer, Paramount directed its artists to completely redesign the character to better match filmgoers’ expectations. The final season of Game of Thrones was famously rushed, disappointing statistically all of its viewers, and now the property is so thoroughly tainted that it’s become the entertainment equivalent of a rag-and-bone man hawking pig knuckles in a dirty alleyway. 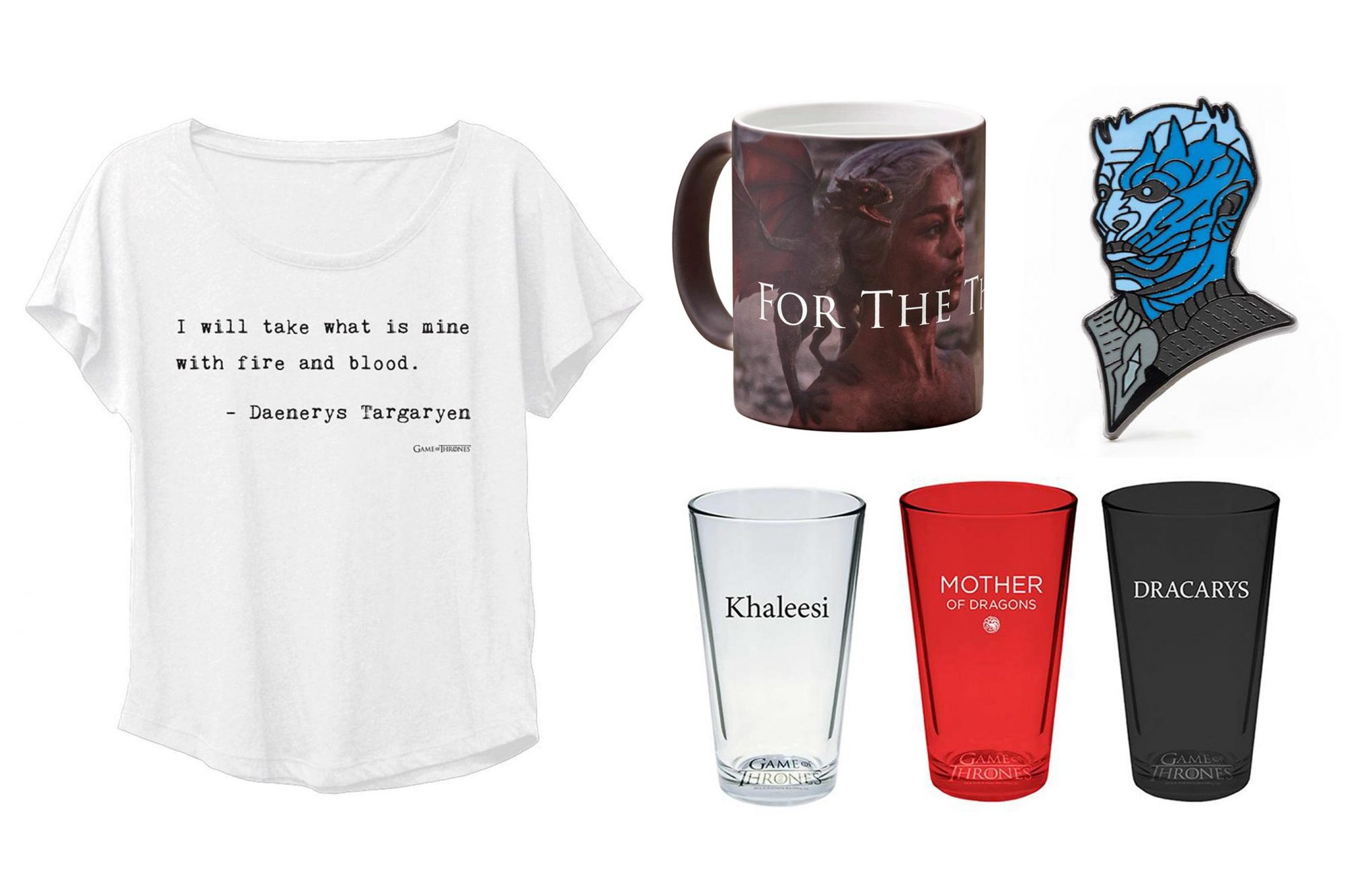 This Game of Thrones merch will show you a good time for 37 cents, or a bite of a Big Mac

Netflix’s entire modus operandi is to discover entertainment properties that once resonated with its viewers, and then resurrect them (as with the 4th season of Arrested Development) or pay homage to them (see Stranger Things, or the E.T./Last Starfighter/Star Wars/Back to the Future supercut mash-up The Adam Project). Gone are the days when corporations would rely on fuzzy data from Nielsen to tell them which shows they think people are watching. Direct, accurate data collection is resulting in entertainment tuned to our tastes – likely at the risk of neutering new ideas before creators get a chance to try them, but that’s another article. 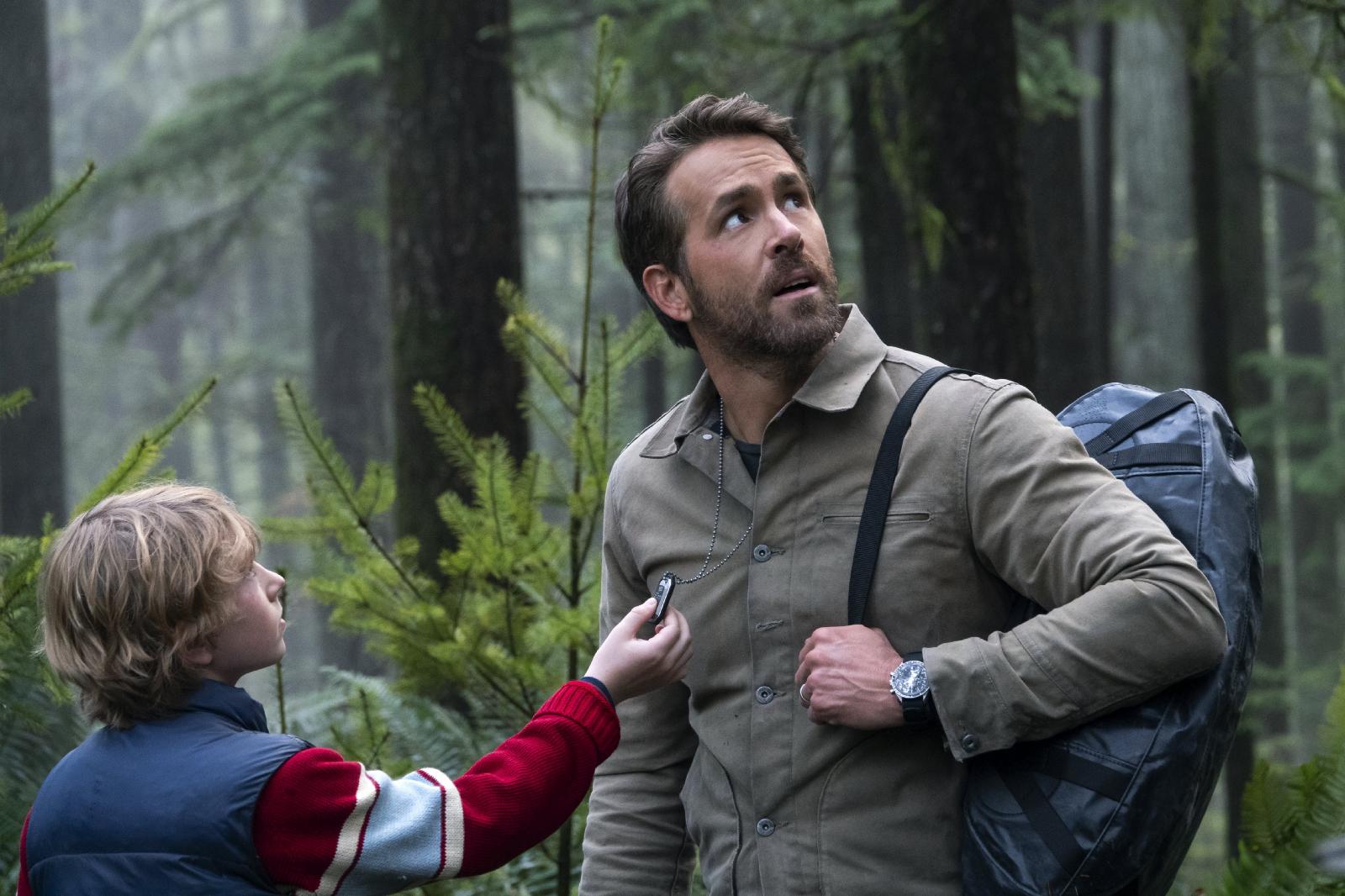 Uncanny valley Catherine Keener largely ruined it, but i’m convinced The Adam Project was designed by a lab computer to appeal specifically to me

So to reiterate, this is why Return to Monkey Island is such an insane longshot, and a collossally Big Deal: over thirty years ago, when i and many of my generational cohort were in our formative teenaged years, we were left with a cliffhanger to a story where the creator lost (or abdicated) control. Then, four sequels were produced that took the story in a different direction, with presumably waning interest and, consequently, financial returns. Then the death of the entire genre was proclaimed. And to put the final nail in the coffin, the game’s rights-holding company was bought out and shut down.

And now, the original creator and one of his co-writers (and upstanding gent!) Dave Grossman, against shocklingly long odds, are finally picking up where they left off.  To conspicuously quote Captain Mal Reynolds from the famously beloved but mishandled Firefly, they’ve done the impossible, and that makes them mighty. 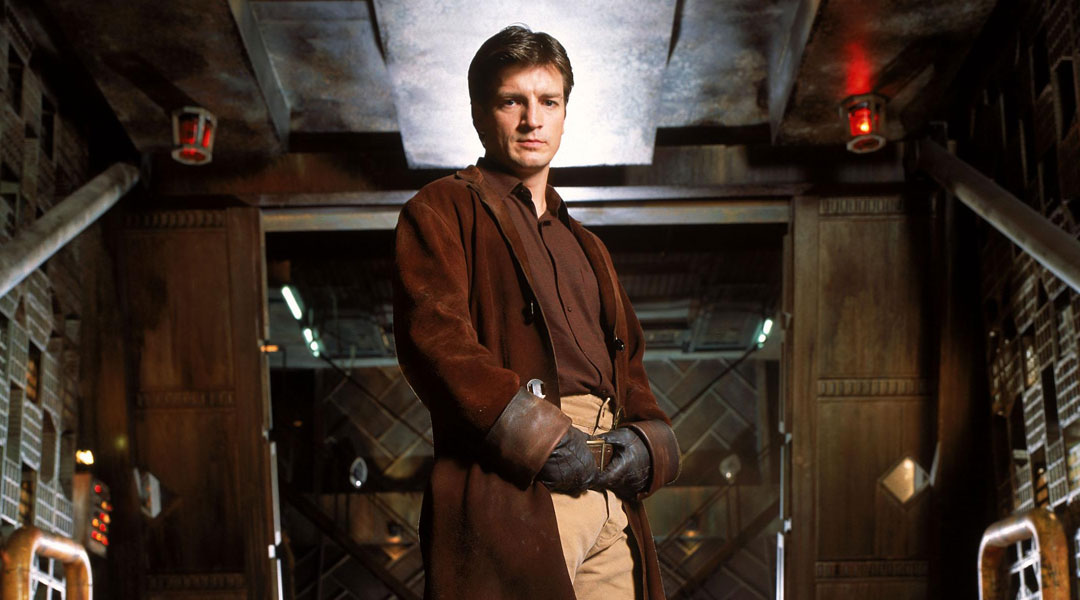