5 Familiar Things About Ryozen (And 1 Surprise)

Ryozen is a new title from Tabula games on Kickstarter that blends time-tested ideas into something i haven’t seen before. Here is a roundup of five familiar elements the game plucks from the zeitgeist, and one way that i think it will uniquely surprise you.

i thought i’d kick off this list with the most contentious item on it. Just as board games with few components are packed into large boxes so that publishers can claim more shelf space (making themselves more eye-catching to the game buying public), more and more games are employing large papercraft sculptures to give themselves more height and “table presence” so that their marketing photos pop. The ulility of these sculptures is frequently questionable. Take, for example, the progenitor of the trend: the cardboard Evertree at the top of the Everdell board, which ostensibly houses the game’s large draw deck, players’ excess pawns, and a few bonus cards, but functionally forces players to cram themselves awkwardly around the table to avoid the end that the tree occupies. The result is an admittedly visually stunning game that sacrifices function for form. Merchants Cove, Meadow, Praga Caput Regni, and A Tale of Pirates all rely on papercraft sculptures with varying degrees of utility. 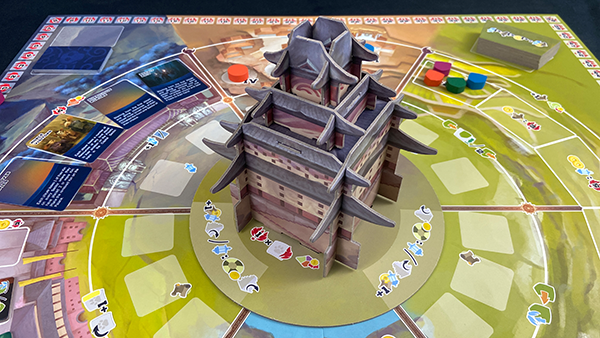 Ryozen‘s bid for eye-catching verticality is the Radiant Phoenix Palace, a three-tiered temple that stands in the middle of the action, unfortunately blocking players’ views of the opposite side of the board. The temple purports to track the game’s three rounds — you add a new section at each dawn phase — but of course, sensible gamers know that round tracking can be more easily and practically served by a simple token on a flat track. Then there’s the issue of dismantling and assembling the palace each time you play; for my part, i have never disassembled my Evertree in all the years i’ve owned the game, because i know all too well how readily glued cardboard can fray. 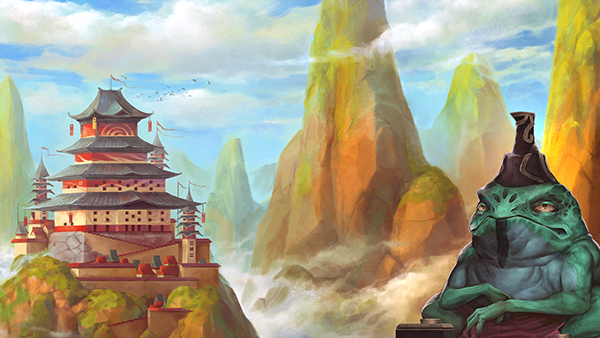 While Ryozen is published by Tabula Games who are based in Italy, the game takes its thematic inspiration from Japan’s Edo period, from your workers’ billowing robes, to the misty mountainous environs, to the game’s name itself - which is presumably a portmanteau of “ryo,” a unit of currency, and “zen,” a Buddhist movement that emphasizes disciplined calm.  Recently, board games have seen an increase in titles that employ a southeast Asian aesthetic, with entries like The One Hundred Torii, Tsuro, TA-KE, Gùgōng, Bitoku, and Tang Garden, which has its own share of papercraft sculptures. 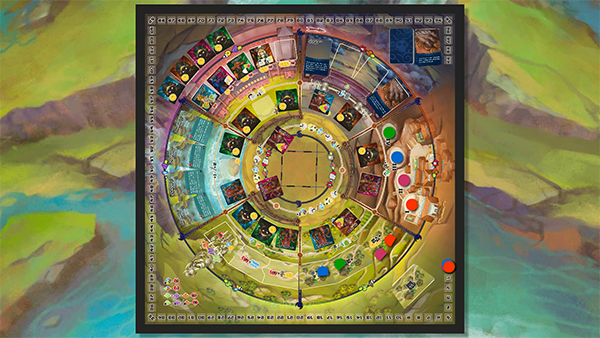 One popular board game mechanic that shows no sign of slowing down is worker placement, where the board features a number of different activities in boxes, and you are armed with one or more pawns that you place on those boxes to do stuff. A hallmark of the mechanic is usually that these boxes are exclusive, so it’s a first come, first served race to reach them and accomplish your goals. Ryozen’s board is a circle split into six different wedges. Each wedge offers an activity, with a certain number of exclusive worker placement spots depending on player count.  You have five workers called “kin” (six workers in a 2-player game) that you place to accomplish things, and certain of your workers can have special abilities that let you bend the rules, which is maybe reminiscent of the grande workers in Viticulture or certain modules in the Tuscany expansion. There’s an increasing trend towards worker placement games where different workers have different abilities, which appears to be a natural evolution of the concept.

Another familiar mechanic that underpins Ryozen is Area Control, where the player who manages to get the most, or the strongest, pawns into an area by the time a scoring round happens reaps the largest benefit. Area control is most often seen in dudes-on-a-map war games, but more casual titles like SmallWorld show off the mechanic admirably. While the popularity of area control has been waning in recent years compared to crowd-pleasers like Worker Placement and Deck Building, it features frequently in many modern board game titles.

Spinning wheels are put to use in interesting ways across boardgamedom. Notable wheel usage includes the interlocking gears in Tzolk’in, and the wheel in Ora & Labora that determines the value of goods in the game’s economy. One of the features of Ryozen that’s bound to be overlooked is its rotating board, perhaps due to the Radiant Phoenix Palace stealing its spotlight. The palace sits atop a wheel that represents the game’s seventh worker placement sector, and it points to a certain number of the outer sectors depending on player count.

Many worker placement games addressed the question of “What do you do when the spot you need is taken?” But Ryozen’s answer is quite interesting: you play a worker to the palace sector, forego its special ability as a sort of penalty for the powerful move you’re about to make, pay a resource as a further knock, and then claim the benefit of one of the sectors that the palace is pointing to, even if (or especially if) its worker placement spots are all taken. Once you take that sector’s benefit, you rotate the wheel so that an entire new set of sectors is in focus, which has intriguing implications depending on what’s going on in the game.

What Ryozen offers is something i’ve never seen before (and with so many board games out there, it’s difficult to say whether this already exists or not) but for my part, i’ve never played a game that combines worker placement with area control. The game’s daytime phase has you placing your workers, and you have the choice between playing them face up or face down. Face up workers might have a special ability you can use, but playing workers face down not only costs a coin, but forfeits those abilities. The advantage is that in the nighttime phase, face down workers count for 2 points of influence in a sector, while face up workers only count for 1.

It’s an eyebrow-raising mash-up that i think is unique in the board game world, but of course, you’re welcome to hit the comments and tell me about all of the other games that do this that i’ve missed, and how they might compare to Ryozen!

Ryozen launches on Kickstarter on March 16th. This article has been brought to you by Tabula Games.